We recently had the pleasure to sit down with Sterling Smith, Pitmaster of Loot N’ Booty BBQ and Reserve Grand Champion of the American Royal Open. The American Royal is the largest and one of the most prestigious BBQ competitions sanctioned by the Kansas City BBQ Society.

Andy: What does BBQ mean to you?

Sterling: BBQ to me is an event. Most people think BBQ is a way to cook food but it is more than that to me. It is a gathering of family and friends, where everyone slows down for a while to talk, laugh, eat, drink, and enjoy each others company.

Andy: How did you get started in BBQ?

Sterling: I was born in Memphis, TN and raised mostly in Mississippi, Florida, and Georgia. BBQ is everywhere in the south. I have always loved to cook and grew up playing competitive sports. In 2008, I worked for a bank that is based in Kansas City, MO. Every year they have an employee BBQ competition on the grounds of the American Royal. I went in 2008 to help out a team and was instantly drawn to Competition BBQ. The smokers, the smell, the food, the camaraderie —I have never seen anything like it and I knew that I wanted to start my own team. When I got back to AZ I started researching everything BBQ and found the AZ BBQ Club. In 2009 I established Loot N’ Booty BBQ with a friend of mine. He has gone on to form his own team and now I compete with my wife and kids.

Andy: Where is your favorite place to eat BBQ?

Sterling: My favorite BBQ restaurant is Little Miss BBQ is Phoenix, AZ. The owners are competitive BBQ cooks and really know what they are doing.

Andy: What is your Favorite thing to cook on your GMG?

Sterling: My favorite thing to cook on my GMG is chicken. Chicken can be over smoked fairly easy and the GMG gives me great flavor and consistent cooking temperatures without the heavy smoke.

Andy: What was your first competition? How were your results?

Sterling: My first competition was in Sept. 2009 at the Prescott BBQ Days. It was an IBCA competition and we took 6th in ribs and 8th in chicken. We were hooked instantly!

Andy: What is the secret to good BBQ?

Sterling: I think the secret to good BBQ is practice. I learned this from one of my BBQ mentors Jay Benedict from Otis and the Bird BBQ team. Don’t practice until you get it right. Practice until you can’t get it wrong. The best thing about BBQ practice is tasting the results with family and friends!

Andy: What is like to cook at the American Royal?

Sterling: Competing at the American Royal this year was one of the highlights of my BBQ career! To be there competing against 165 Grand Champion teams on day one and 550 teams on day two was just amazing. I love competitive BBQ for many reasons and one of them is getting to know the people and your neighbors. I had neighbors to my right from Missouri and to my left from Texas. I am Facebook friends with both if them and we chat regularly. Walking around the grounds, I saw all the BBQ elite – Myron Mixon, Johnny Trigg, Tuffy Stone, Darren Warth, the list goes on. To be competing against these top level competitors has been a dream of mine since I started competing and to get that chance was unbelievable. 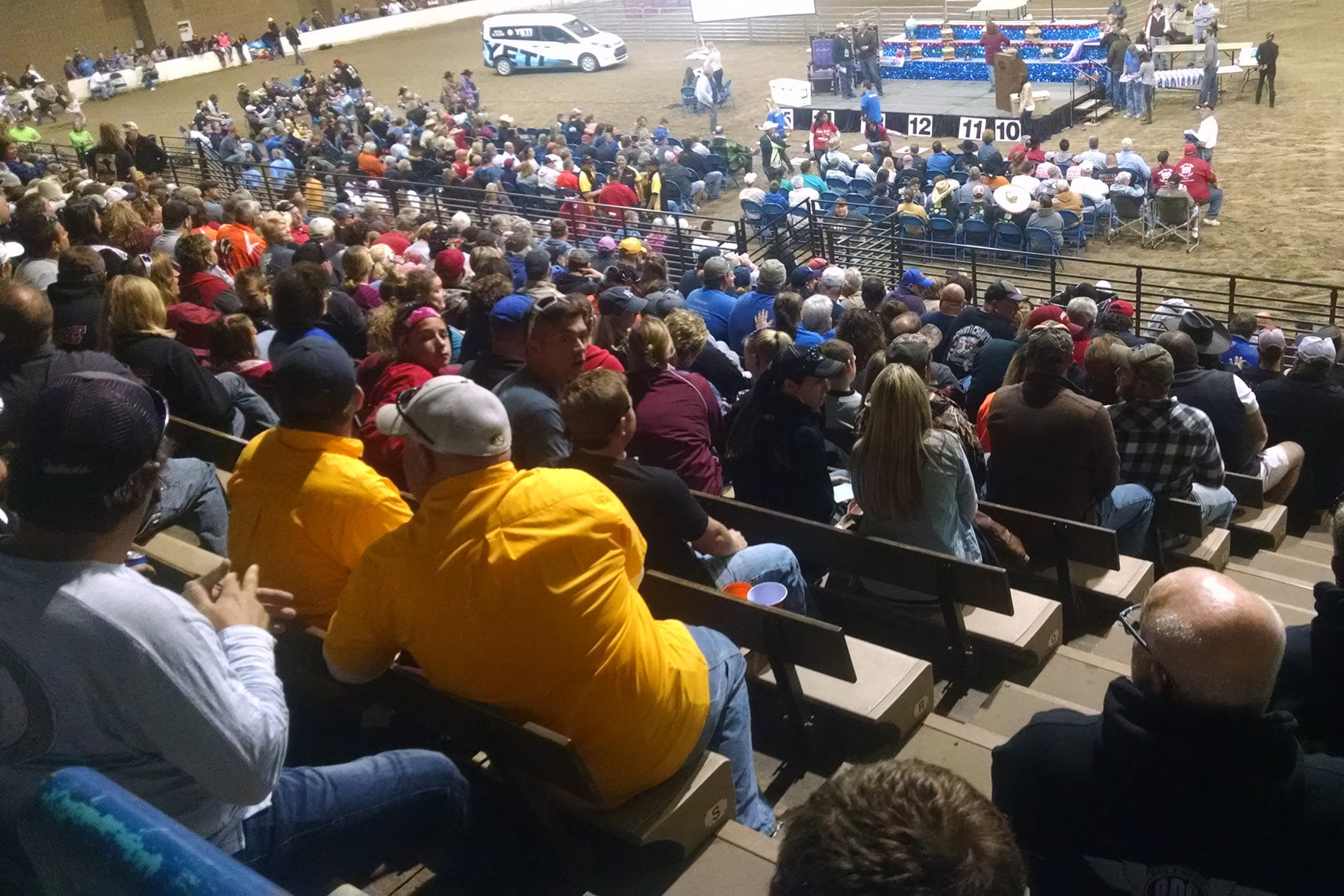 Awards Ceremony At the American Royal

Andy: How did your cook go at the American Royal? Any hiccups?

Sterling: Day 1 of the American Royal was the Invitational. In order to compete in this, a team needed to win a qualifier competition. The field was stacked with 165 Grand Champion winning teams. I thought I had a great cook and was excited for the awards ceremony. The awards ceremony at the American Royal is like no other. Huge bleacher seating overlooking the dirt arena with chairs set up in front of a big stage. All the teams waiting in anticipation to hear their name called and get their “feet dirty”—which I learned means to take a walk in the dirt arena. They called the top 20 in each category (chicken, ribs, pork, and brisket) starting with 20th on up to 1st. The 3rd place team in chicken had a perfect score of 180. Wow – 3 perfect scores in chicken, I knew I was in some serious competition! They called 2nd place then they get to first. I knew I had a great chicken turn in and my chicken had been doing pretty good all year but you never know what the judges will think of it. I got called for 1st place chicken at the American Royal Invitational with a perfect 180! I can’t begin to describe the feeling – at first I was ready for the cameras to appear and someone shout “You just got punked!” But it was real. The very first category and I got to get my feet dirty! I was on cloud nine – they could have never called my name for the rest of the competition and I  would have been satisfied but ribs were next. I get called for 7th place ribs – it just got real! No calls in pork and brisket but 2 top 10 calls with a 180 in a 165 team event and Im thinking I have a chance. They called the top 20 overall and I am not called. I took 142nd in pork and 154th in brisket – ouch! That put me at 86th overall. Day 2 comes and I know they liked my chicken and ribs but I needed to change up my pork and brisket. I talked to my neighbors from Missouri and asked about local flavor profiles. They gave me some good insight and I went with their recommendation. I think my chicken and ribs were the same on day 2 but my pork and brisket were way different. Awards comes for day 2 and it seems like the arena shrunk! Instead of 165 teams there are 550 teams anxiously awaiting. They call the top 25 in each category and I do not get called in chicken or ribs. In my head (like the other 549 teams are thinking), I got 26th place. Pork comes next and they call me for 2nd place pork, I was in shock right about then. Before I can even get back to my seat I am called for 19th place brisket. I am hoping they liked my ribs and chicken the same as day 1, when they start calling the top 25 overall. Reserve Grand Champion – Loot N’ Booty BBQ with a 701.1428—just shy of Tuffy Stone who won GC. What an amazing feeling to know that this little Arizona BBQ team can hang with the best. 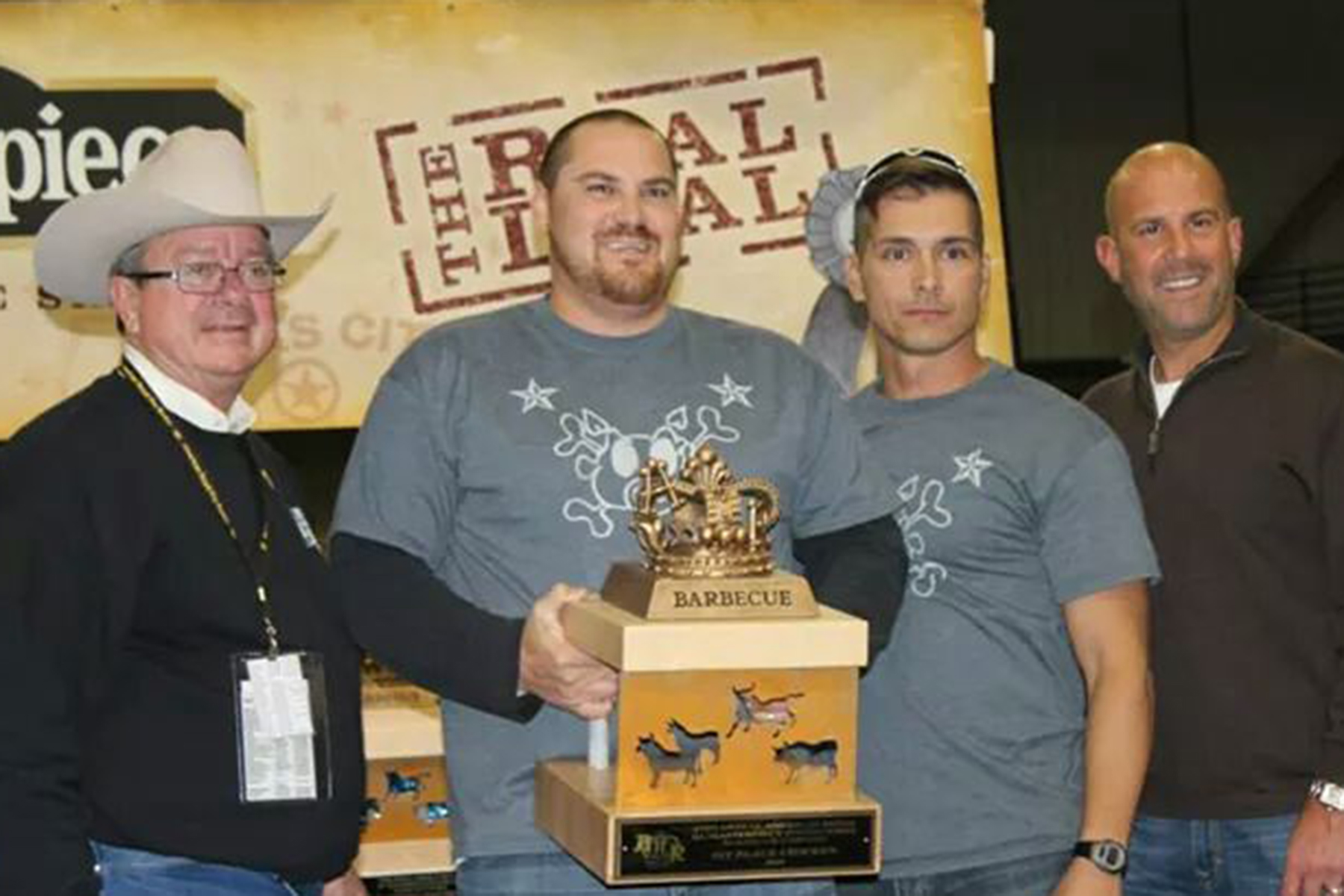 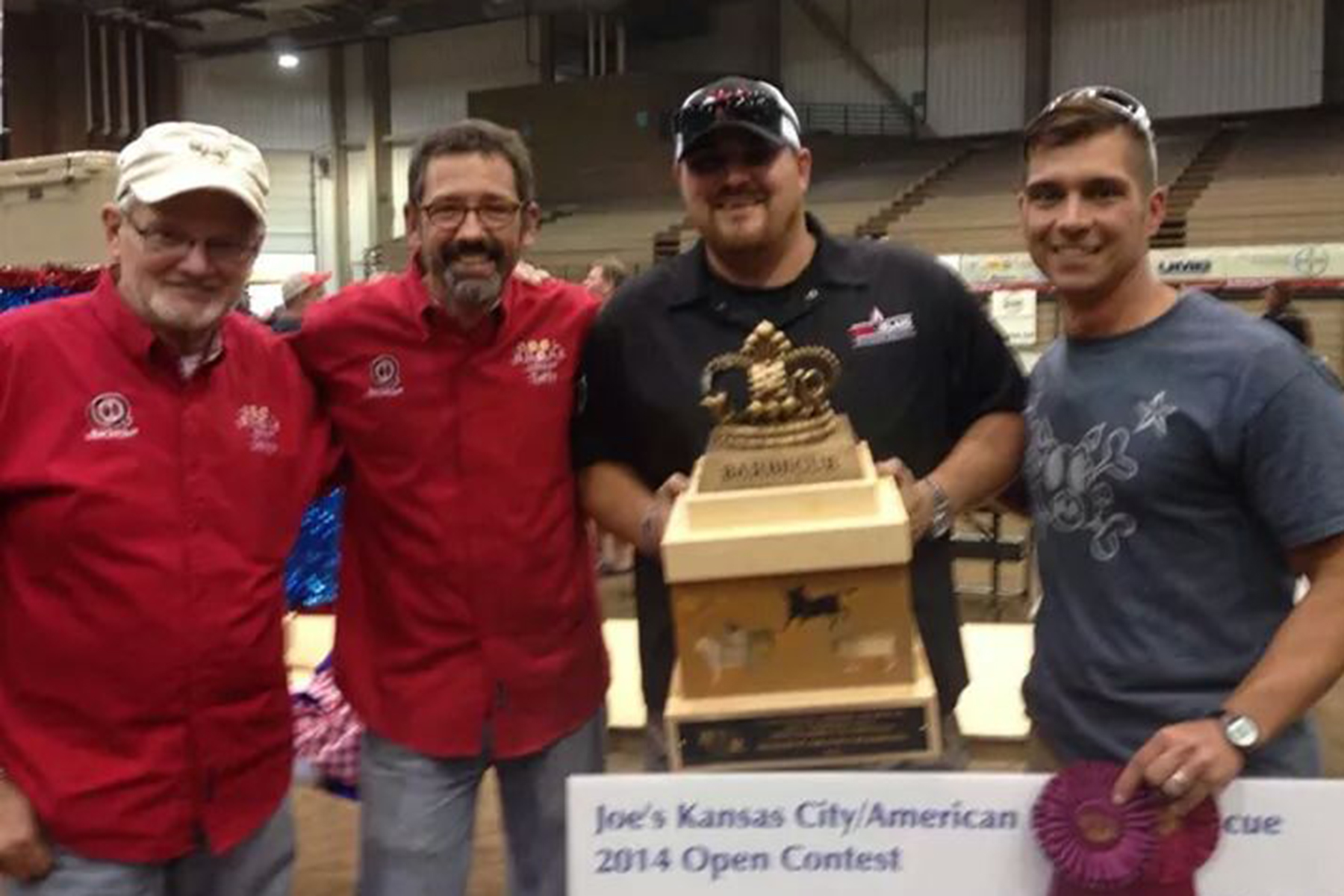 Andy: How did the GMG help you in your win at the American Royal?

Sterling: I use the GMG Davy Crockett to cook my competition chicken on and use it when I need extra space for the other 3 meats. I love the quick temperature control I get out of it. I can cook at 275° then ramp it up to 400° fairly quick to set my sauce. I can’t get that out of my other smokers with such ease.

Andy: What are your plans for the coming BBQ season?

Sterling: My plans for this coming BBQ season is to continue doing what is working for me. I love my Davy Crocket and have been practicing on a Daniel Boone recently. I really enjoy the flavor profile it puts out with my rub and sauce combinations.

Davy Crockett and some sweet hardware

Andy: Any tips you’re wiling to give out?

Sterling: There are many BBQ tips and pointers that I have accumulated over the past few years but the one that resonates with me best would be to constantly have airflow. I always cook with my exhaust vents wide open. I want the heat and smoke in my smokers to constantly be moving over my meats. Stagnant air and smoke can cause a bitter taste and ruin a good piece of meat. 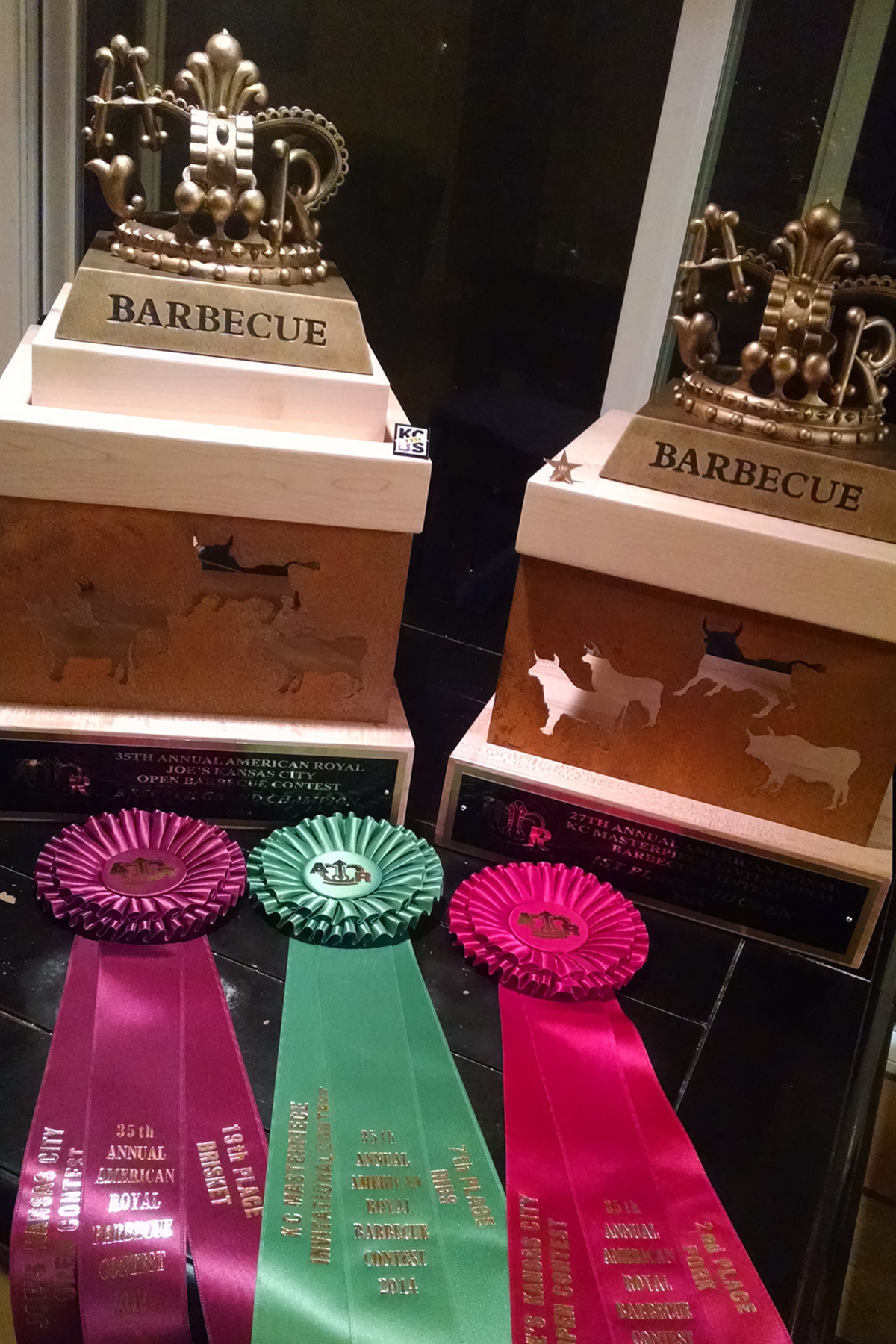 What makes all the blood sweat and tears worth it