We had a chance to talk to Pitmasters Lionel Bateman from North Carolina about BBQ in his Region, one of the Pig Pickin’ Capitals 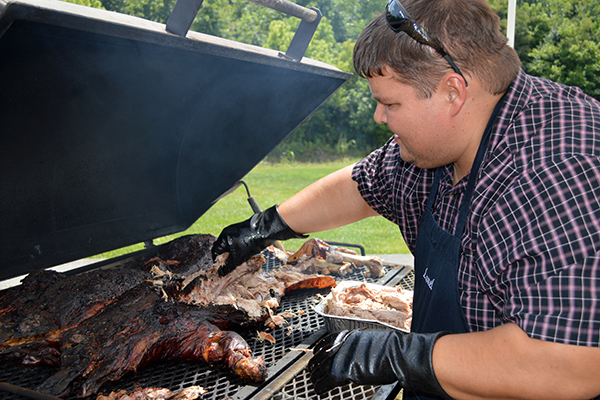 Lionel- Growing up in Northeast North Carolina my first memory of BBQ was a standard pig picking. Nothing like a group of family and friends gathered around a large grill pickin’ your favorite piece of pork from this butterflied pig in front of you. Add the sides of coleslaw, barbecue potatoes, and hush puppies and your day was set! Anytime from that point on when I heard we were having or going to a pig pickin’ I was excited.

Lionel- It has been a long road to get where I am at. When I first met my wife I couldn’t cook anything. I’ve burned my fair share of meats on the grill. I actually gave it up for a time because I was that bad at it. After a year or two off from doing any type of cooking I decided I wanted to try again. We went and purchased a $20 grill and that is what I started on. I started reading various cookbooks and watching cooking shows and I learned how ingredients went together. As I tackled the simple items I started into BBQ. North Carolina BBQ is pork, plain and simple. I worked on pulled/chopped pork and ribs since that is what most people ate in the area I lived in. Little did I know what I was getting myself into. I have gone from that $20 grill to an assortment of grills and smokers (Latest count 12)

Lionel- I’ve traveled across the country several times and have ate at some of the “premier” BBQ restaurants that our great nation has. North Carolina BBQ though is all about the pork. On the eastern side of the state you can go back to the colonial days and learn how the Native Americans taught the Europeans about cooking over live fire.Throughout the states history BBQ has always been the same there. It is part of the culture and something that brings the people of the area together (unless you start arguing about which part of the state has better BBQ)

Andy- Does your state have separate sub regions of BBQ, if so how do they vary?

Lionel- North Carolina is a unique state for BBQ. It is pretty much divided into two sections. Eastern North Carolina BBQ is usually whole hog with a vinegar/pepper sauce combo. It is usually chopped fine with the skin and sauce mixed in. This is what I grew up on and thought BBQ was for many years. The western North Carolina BBQ is mainly shoulders with a Vinegar/Tomato sauce combo. When I first had it, I wasn’t sure about it. I can actually say I like both of them for their respective usage. When you get down towards the North Carolina/South Carolina line you start running into the mustard base sauce (more in SC than NC). I was actually surprised how good the mustard base sauce could be on certain items (I like them on wings and as a dipping sauce).

Andy- What is your favorite BBQ restaurant in your state? Why is it so good?

Lionel– I may upset a few people back home with this, but my favorite BBQ restaurant is B’s BBQ in Greenville, NC. They’ve only been open since the 70’s but they have the feeling of being there much longer. The building isn’t much to look at but the food is amazing (pork and chicken!)
There is no phone so you can’t call in a order, there is no website, and if you get there late, there may be no food! They serve eastern North Carolina BBQ and the traditional sides. Nothing fancy, just good BBQ. 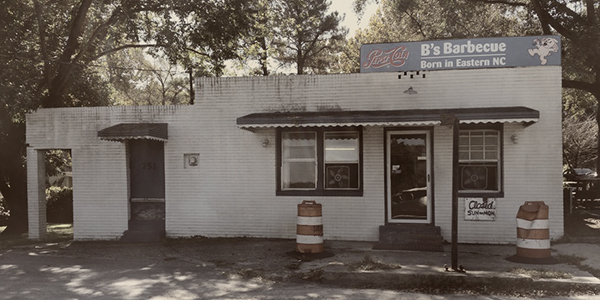 Andy- What is your favorite thing to make on the BBQ?

Lionel- My favorite item hands down to BBQ is whole hog. There is something about manhandling a 130 lb dressed pig over hot coals. There is a skill involved in making sure all the meat is perfect. You have to remember you are cooking hams, shoulders, rib meat , loins, and belly. All of these cook at different times and get done at different temperatures. Then there is the fun of serving that perfect meat to your friends and family off the grill. Doesn’t get much better than that. 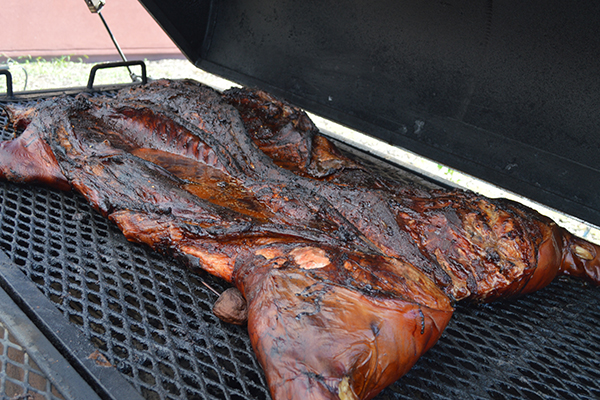 Take out 4 cups from the gallon of apple cider vinegar (we always put it a a bottle and use again at another time). In a bowl pour a few cups of the cider vinegar (from what’s left in the gallon) then combine the ketchup, brown sugar and hot sauce and whisk together for a few minutes to get the brown sugar mixed well. Using funnel put in the remainder dry ingredients in the gallon jug of apple cider, then pour the liquid mixture through the funnel into back into gallon jug. Shake well and let sit for a couple days for best flavor.